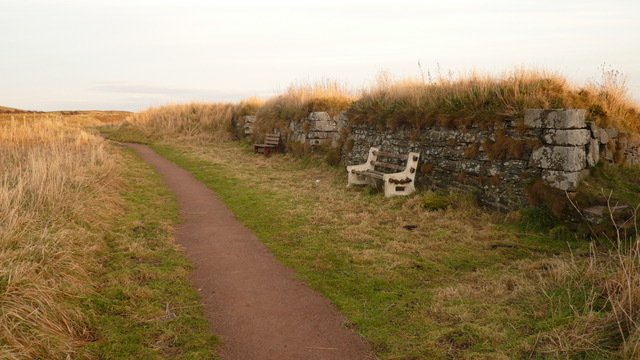 A coastal path leading from the sweeping bay of St Cyrus in the Mearns past clifftops and stunning natural features to the sandy beach at Cullen in Banffshire – such is the vision of the Lord
Lieutenants of Banffshire, Aberdeenshire and Kincardineshire

Last night, (Thursday) the Lord Lieutenant of Kincardineshire, Alastair Macphie, hosted a launch event for Kincardineshire’s role in the creation of this new walking route as a legacy project to celebrate the Queen’s Platinum Jubilee.

Mr Macphie said there was a host of wonderful sights along the way – rock stacks, waterfalls and first class beaches. So the coastal path, he said, could become one of the top five walking routes in the United Kingdom.

The Kincardineshire Development Partnership helped facilitate the evening which saw representatives from volunteer groups, officers of Aberdeenshire Council and councillors in attendance along with MSP Mairi Gougeon who is Cabinet Secretary for Rural Affairs and Islands.

Landowners, whose co-operation will be vital to the project, were also present and highlighted some of issues they feel will have to be addressed such as litter and impact on habitats and livestock.

Many sections have already been completed, so the challenge is to join these sections. The creation of the Jubilee path will be volunteer-led, but a project manager, James Ferrier, has been appointed and was introduced to the meeting.

And Caspar Lampkin of the Mearns Coastal Heritage Trail group – MERCHAT – described their work between Johnshaven and St Cyrus. The group have been innovative in their approach to both path building and measures to counter erosion, such as living willow walls.

Officers of Aberdeenshire Council described their current role in maintaining our path network and gave an overview of the local authority’s role in supporting the Jubilee project.

Alison Simpson described projects she had already supported, especially along the Banff coastline. In completing the path, she said, there would be some easy wins but other sections would take longer.

But the end result could be a route incorporating both local heritage and stunning landscape features.

”The coastline of Aberdeenshire is like a string of pearls,” she said.

”And the path is just the string joining them.”