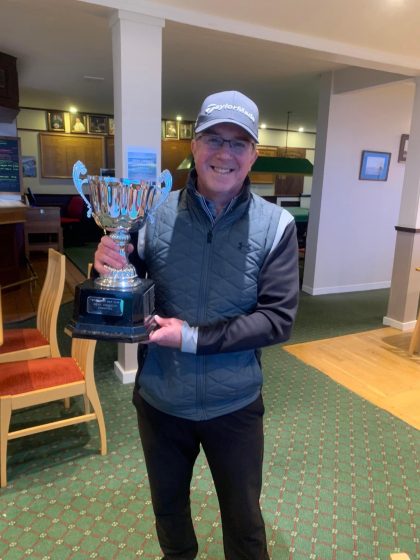 It’s been a packed week of competition at SGC, the key events being the annual Texas Scramble and the culmination of the Handicap Trophy. In the case of the Scramble, it was a blessing having blue skies overhead after haar had blighted last year’s affair. It’s not easy showcasing your infamous views to visitors when a dense pea souper obscures the landscape.

The Texas Scramble was a roaring success, many visitors sharing the beauty of Stonehaven Golf Club with its members. The competition winners were a Stoney quartet, maximising their local knowledge to notch a remarkable 47.8, eighteen under par! The format of a Texas Scramble finds each member of a team of four teeing off and the best drive selected from which the next shot is played, again by all four team members, the hole subsequently completed in the same fashion. The scorecard ought to be littered with birdies given teams have four chances to perfect each shot but to average a birdie per hole, as the winners did, was incredible. Congratulations to Jacqui Blackburn, Sarah Forbes, Ronald Forbes and Ian McDonald on a splendid success.

My team’s efforts descended into farce. We started poorly and went downhill from there. After a turgid opening twelve holes, including a reprehensible bogey on the 6th, trouble broke out on the 13th green in the form of outright mutiny. In my capacity as team captain I’d chosen a putt which appeared simpler than its alternative, albeit longer, thereby vetoing the unanimous selection of my three playing partners. As you might guess, each of us duly muffed said putt and this gave rise to an appreciable degree of tumbleweed over the last five holes. To top the whole farrago off, we then managed an ignominious disqualification for signing an incorrect scorecard. As team captain I was apportioned the blame but let’s face it, it’s come to a pretty pass when you can’t trust the person who’s recorded the scores all the way round to calculate 30+32 successfully.  In John Hunter’s defence, he was only the two strokes out when declaring a 64 🙄.

The Handicap Trophy was closely fought, a gruelling test of consistency with four rounds played in the space of seven days. The final round started with half a dozen players within five shots of the lead and it was Chris Nicoll who emerged victorious, his closing 65 securing the spoils by three strokes. Congratulations Chris, the only player to complete the tournament under par.