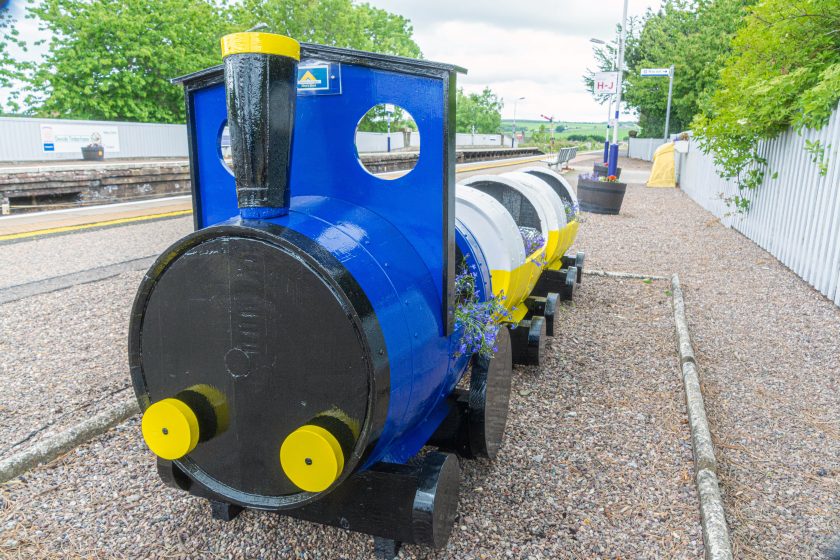 Stonehaven Men’s Shed was pleased to be asked by Stonehaven Horizon Group if they could assist in the replacement of the “choo-choo” planter on the Northbound platform at the railway station, the current planter had seen better days and was slowly coming apart. The guys were keen and happy to help and the job was taken on by George McKinnon and Paul Tosh who carried out much of the work with additional help from their colleagues at the Shed as and when required.

The following series of pictures/collages illustrate the work undertaken to build the replacement planter.

Barrels were sourced, purchased, and brought to the Shed where Paul & George carried out the “refurbishment” of the barrels to make them fit for use as planters.

Cradles to carry the locomotive and coaches were fashioned, by hand, at the shed and the metal barrel hoops, having been sanded down were given the first application of protective paint.

The locomotive and coaches and wheels were cut to size and George and Paul applied undercoats, assisted by the Shed’s Vice Chairman’s grandson, Lachlan Shanks. Once the undercoats were applied and had dried then the finished colours were applied to the component parts.

The team cracked on with the painting and finishing of the “choo-choo” and were visited by John Cruikshank of Stonehaven Horizon who showed his approval for the job done so far.

Once all the painting had been done, and dried, all that remained to be done was to fit the finishing touches and transport the finished train to the station where it was installed on the Northbound platform by George, Paul and the team from Stonehaven Horizon.

Paul and George with the finished train planter in place at the station.