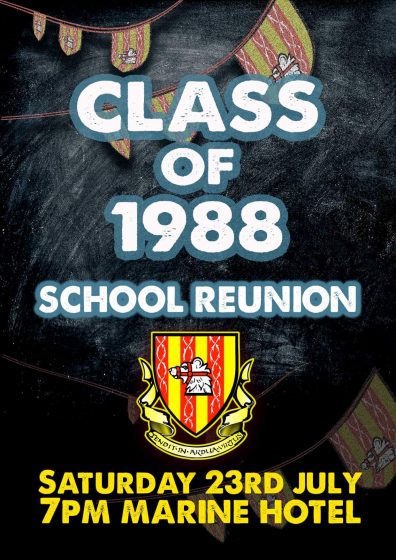 Remember when you were a teenager skipping out of Mackie Academy for the final time, the world at your feet?

For some the promise of university hijinks lay ahead, for others a walk directly into gainful employment, or perhaps a year out to contemplate one’s navel. One thing’s for sure, the notion that one day you’d turn fifty years of age was laughable, folk in their fifties were ancient, done for, pensioners in waiting. And yet…

Time waits for no man or woman and the school leavers of the eighties now find themselves headlong into their sixth decade, with all the wrinkles and grey hair (or none) that brings. Yesterday you were a sprightly teenager, today a crusty old duffer. Where did the years go? You can accept being thirty, even forty at a push, but fifty?! Hell’s bells.

It’s not all bad, there’ll be favourable memories to look back upon; families started, children raised, careers enjoyed, friendships cemented. There’ll be war stories too though, those regrettable episodes you’d sooner have forgotten, but school reunions have a habit of helping you heal – in that when you learn of other folk’s tales of woe you feel better about your own. Reunions may have you comparing your inglorious moments but equally they’re an opportunity to amble down memory lane recalling glory days over a few refreshments, resplendent in your rose tinted spectacles. And if you’re really lucky you’ll cop off with that girl/guy you fancied all those years ago 🙂

This year it’s the turn of the Class Of 1988 to revisit their former glories and war stories. On July 23rd they’ll be trawling the old haunts of Stoney, gossiping about school teachers who caused them grief and poking fun at each others’ dress sense, then and now. There’ll be drawbacks mind, it comes with the territory. For example, it’s chastening to observe some of your peers as fit as a fiddle while you’re crammed into 40” waist jeans, your beer gut barely obscuring your belt buckle. And truth be told, some of the herberts you reunite with merely prove how accurate your memory is; you didn’t like them then and ain’t going to start liking them now! The risks you take on reunion night are far outweighed by the positives though, just get down there and shake your thang. Reunions are a blast.

There’s a fine tradition of former Mackie pupils gathering together for a knees up further along life’s road, July 23rd offers the class of 1988 their turn to paint the town red. All ex-pupils of that vintage are invited to rendezvous at The Marine from 7pm for fun and frolickery. Debauchery is optional.

If you left Mackie in ‘88 remember to clear 23rd July 2022 in your diary, dig out your stonewashed jeans, rehearse your Wham Rap and create some stories for the wider public to read about in Sunday morning’s papers