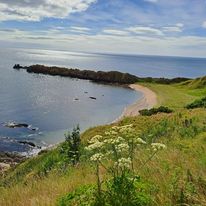 Last week’s main event was the culmination of the Seniors’ Championship, the final 54 holes played in both the Scratch and Nett formats. In an announcement that has no danger of shocking the golfing world, I can confirm that Neil Irvine emerged victorious in the Scratch event, winning by a wholesome sixteen shot margin thanks to rounds of 70, 69, 66. Pretty good shooting, these scores don’t find you, you find them, so congratulations to Neil on a fine achievement and hats off from all of the Seniors (doubtless revealing a parade of bald heids and grey combovers).

The Handicap format was a closer affair with David Henderson triumphing by a single stroke over Neil Irvine with Gordon Ironside a further six shots back, one ahead of Billy Shepherd.

Saturday’s competition was the McNabb Trophy, a Bogey event whereby your score is compared with the nett target of 66. I have to confess to being bewildered by this format but, like most, I simply hand in my card at the finish and let the computer do the rest. 112 players took part and Steven McGhie won by virtue of a better back nine over Jack Nowak and Brian Hunter.

My own Saturday three ball (comprising myself, Simon Mitchell and Brian Hardstaff) almost came to blows on the 12th green. We’d been dancing around our handbags on every putting surface until that point, contorting our bodies into all manner of shapes in an attempt not to tread on each other’s line. It was akin to a game of Twister. Exasperated after eleven holes of this pantomime, I decided to take the bull by the horns and trample all over Mitchell’s line on the 12th green. Well, to my mind, the greens were rock hard and I had soft shoes on, plus he’d been trotting out that familiar refrain ‘don’t worry about my line’ all morning. So I called his bluff, only for him to kick off, with the backing of Hardstaff, both protesting over ‘rank bad etiquette’ and suggesting I take a long, hard look in the mirror. I stand by my behaviour however, the time has come for ‘line treading’ protocols to be outlawed beyond the winter season if you ask me. Do I have a seconder?

In the Ladies Section Fiona Currie triumphed in the Medal during an unusually quiet week of fixtures, that’s two weeks running she’s emerged victorious (having partnered her husband to glory in the Greensomes).

The Junior Section took part on home turf in the Sixes League, finishing second behind Aboyne GC. Stonehaven now bow out of the competition in terms of regional qualification but a sterling effort was made by the team of Daniel Moseley, Oscar Wilson, Abigail Fenton, Mollie Mason, Daniel James and John Cullion.

(*N Irvine 193 but had already scooped the Scratch comp)