Public Call for Return of Invercarron 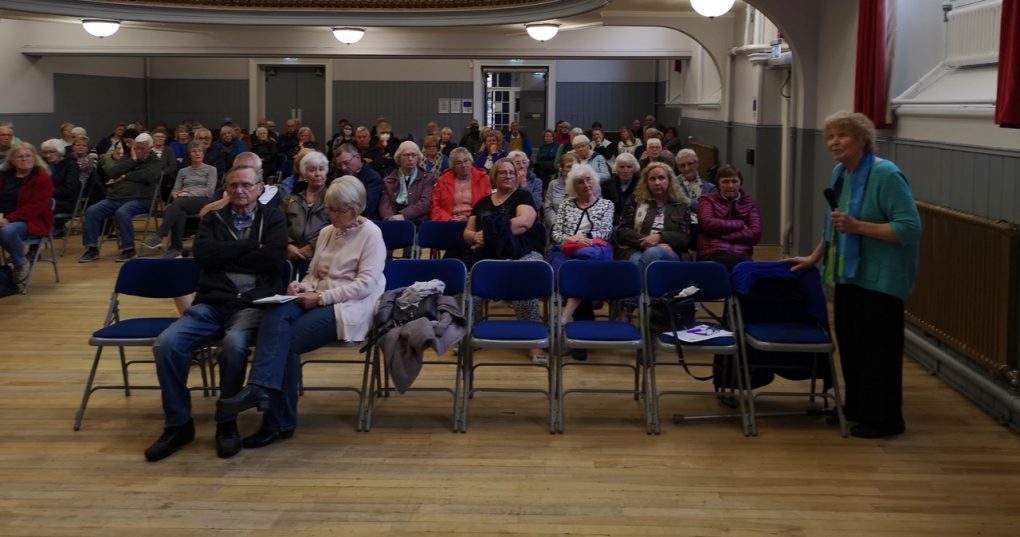 A FORUM will be formed and a strategy formulated by our community council – such are the actions emerging from a public meeting last night, where the overriding message was ‘change the decision’.

The meeting with over 100 locals in attendance was hosted by Stonehaven and District Community Council. Chairman Bill Watson described its purpose as being to determine the most immediate requirements to support Stonehaven’s elderly population.

But those attending the meeting had only one aim: to voice their anger and disappointment at the fate of the Invercarron Resource Centre – and their desire to see it re-instated as an amenity for the town’s older people.

It worked – what happened?

The centre first opened in 1995, as, ‘a purpose-built edifice, tastefully furnished, warm and comfortable, with friendly, helpful and caring staff and volunteers, always ready to help.’ Before Covid struck, over 30 groups were active there, including the Stroke Club, a lunch and social club and Alzheimer’s Scotland Day Care.

One of the first people to speak at last night’s meeting was Irene Squires, a former health visitor.

She said: ”I was one of the committee that lobbied the council to build the Resource Centre. We had a big, big vision, not just to give people a meal once a week, but to meet their physical and social needs.”

Mrs Squires added: ”It was a big vision and it really worked. What happened?

”We need that big vision back for the elderly and older people in Stonehaven.”

Need for use as vaccination clinic not accepted

The decision to close the Invercarron was taken by Aberdeenshire Health and Social Care Partnership, AHSCP, who said the building was their only option to provide a vaccination clinic to serve the area’s population.

”It takes two and three quarter hours from Edzell Woods by bus,” he said. ”It has got to be a portable system. They do not need a building the size of the Resource Centre.”

The impact of the closure of the Invercarron was highlighted by a woman who said it was now impossible to access anything other than emergency respite care.

David Lawman said we are not even offering our older people what was offered 27 years ago. He described the facilities needed for such groups – access, toilets and seating.

”What we have done is take the most suitable facility away with no thought for replacing it.”

Mr Watson introduced Liz Rushmer of Mearns and Coastal Healthy Living Network, MCHLN, a small charity based in Laurencekirk offering support and activities to older people. Funding is being provided for a part-time development worker at MCHLN, in an effort to address the loss of amenity at the Invercarron,

Saying she was already already one month into her one-year contract, Ms Rushmer made it clear she was keen to pick up on immediate needs and find solutions to loneliness and isolation. She told the meeting she had hopes of securing a downstairs room at the Community Centre.

And she said an older persons’ forum should be established in Stonehaven – one that could be an activists’ group and lobby the authorities. Ms Rushmer has already arranged a meeting at the Community Centre on June 13 to launch this forum (details to be confirmed).

One hundred people gathered for strong words of protest

In a meeting where the microphone passed swiftly from one member of the audience to another, one man said: ”Why are we relying on a charity to fix the mess?”

Another member of the public took the microphone. He said: ”One man said action speaks louder than words. The 1,000 people who signed the petition should stand outside the building at the Invercarron.”

And Graeme Thain said access to be building could be achieved and proposed an occupation of the centre.

Meanwhile David McDonald said the size of the turnout at the meeting was proof of the strength of feeling in the town.

”There are over 100 people here,” he said. ”And not one voice against protecting and reinstating the Resource Centre.

”These 100 people, at a time of exit from Covid, saw fit to come here together and express support – and to ensure the people who are responsible for these facilities are well aware of local feeling.”

A strategy to be determined

Throwing down the gauntlet to the authorities, one woman said: ”Someone somewhere can change the decision.

”Who do we contact? If they are also saying no, then we go higher. There is a lady in the government whose job it is to look after the elderly – we go to her. There is a health minister. We need to go to the people who can change the decision.”

With Jim Stephen saying our MP and MSP should also be involved, the meeting concluded with our community councillors saying they would determine a plan of action in the continuing battle to have the Invercarron Resource Centre re-opened.

Offer of hospitality at Chapelton

One glimmer of short-term hope during the meeting came when a representative of Brio Retirement Living at Chapelton offered their restaurant and amenities for use – free of charge. Jim Stephen said this was an offer that should be seriously looked at.